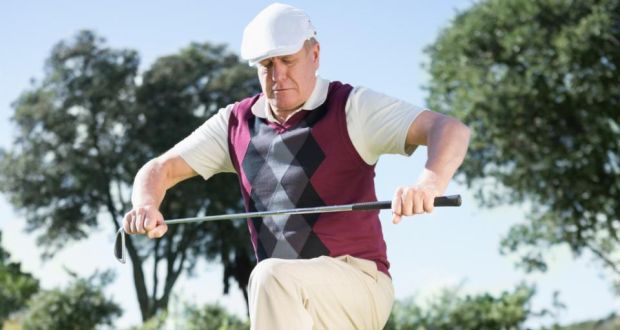 It was well on its way to being one of those hot yet airy days that make us Irish a little giddy as I made my way to my local golf course.

It was very early and there was no-one else there – the whole manicured green wilderness before me was mine!
I was playing quite well early on and mind and body were light and blithely unencumbered. But around the fourth hole a spectacularly wayward drive followed by a fluffed recovery from the gnarling rough darkened my mood just a bit.

Then a little later, I carried out a shallow-excavation job with a seven-iron that had me swearing out loud. Bloody wars had been fought over less soil than the divot I was stomping down. Pretty soon this wretched, malevolent game had been expressly designed to frustrate me. Why me? I whined, and with no-one around I was free to let loose my rage. But so far, so containable, I thought.

Near the seventh tee-box was a large, flat rock and after barely watching the brand-new Titleist 1 disappear into irretrievable oblivion, I sank down for a breather. To my surprise, my eyelids began to blink hot salted rivulets of anger and frustration. The dam of my defences had finally burst.

I hadn’t cried for a long time and it didn’t last long. But my misery was only clearing its throat. Pretty soon everything came into play as I sat on that rock, the looped tape of my self-admonishment whirring away loudly and relentlessly – no longer insidious, at least.

Here in the petty court of my super-ego, my accumulated failures were read out shrilly and pitilessly, the timid objections of my shrinking self-regard overruled in his seat.

Guilty, guilty, guilty chorused the jury of my selves, as directed by the judge, also myself, of course.

Tried, sentenced and ready to be taken down in my own head.

And it wasn’t much better outside, all I could see, hear, touch, taste and feel was poisoned with regret and recrimination.

But even negativity needs a break and with just arid eyelids to remind me of my evaporated tears, I got to my feet and resumed my round.

“I am not my golf game” was my calming mantra as I sifted through a ragbag of half-remembered, half-forgotten tips to find something that might rectify my errant efforts.

This life-long quest for an efficient, consistent golf swing is the alchemist’s quest of our age, with perfection always a minor grip adjustment away from perdition.

Golf itself is the ideal game for obsessives, with that constant tinkering with, grip, swing, stance, putter, equipment, mental approach . . . you name it.

I wonder about Padraig Harrington and whether his obsessive practising and rituals have got him to where he is or have prevented him from getting where he might. Maybe both.

And then it happened, as heart-thumpingly unexpected as a great shot often is for those of us not blessed with regularly-accessible talent, an effortless five-iron swish sent the ball soaring heavenwards and as its downward trajectory began, the green was already preparing itself for its arrival. The ball came to rest five feet from the pin!

The effort of striking this wondrous shot seemed to have only barely rippled the sinews of my forearms; every part of it, from takeaway to finish as natural and easy as the drawing in and letting out of breath. I was back in the game!

Thinking about it even then, I was aware the very idea that outside worries would not impinge on my game of golf was a fallacy. I knew also that, just as a poor seven-iron shot did not represent all that I could hope for from this pitiless game, neither did a good five-iron shot represent all thwarted promise finally fulfilled.

From a psychoanalytic perspective I now see that in fact, yes I was my golf game that day. Those tears and admonitions were not for scuffed golf shots, they were for myself, for all that was happening, or rather not happening for me in the world.

In golf, in sport, I believe you bring everything on to the course; there is no separation of church and state, of mind and body. As Freud pointed out, for reasons of conscience, of shame, of guilt, or plain fear, certain issues are pushed out of the conscious mind, or repressed. But they reappear, in not consciously recognised ways when the psychological guard is down.

And it is very often down on the field of play . . . especially when we believe no-one is looking. Sport lets you be yourself, only more so.

By the way, I missed the putt.

0 comments on “An Irishman’s Diary: what Freud taught me about putting”