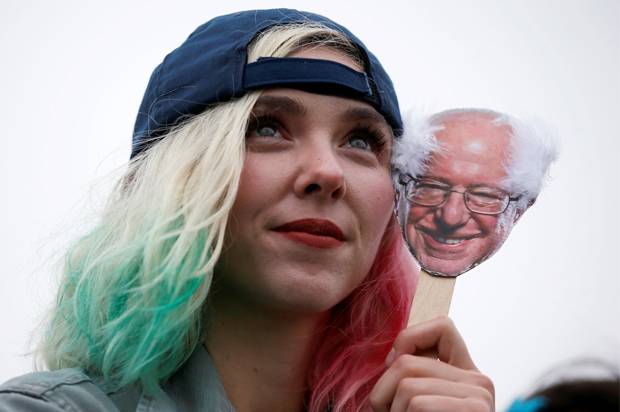 The kids in America love Bernie Sanders. Love him! But he hasn’t a hope of winning the Democratic nomination to run for president of the United States.

Not a hope. Why? Because while the Millennials, or Generation Y as they have also been dubbed are now the largest generation in American history – far outnumbering Hillary Clinton’s Baby Boomers cohort – and overwhelmingly liberal and idealistic in their views, not enough of them will turn out when it matters to actually vote for Sanders.

She can’t let on publicly, but Clinton knows this; she’s got the Boomers – the moms and dads who went to Woodstock and may or may not have inhaled – vote sewn up and it’s all over bar the shouting. And shouting there will be, because if there’s one thing kids are good at, according to Derek Thompson in The Atlantic, it’s shouting.

In a wonderful essay entitled The Liberal Millennial Revolution, Thompson wryly observes: “Millennials might make a lot of noise between presidential elections, but in November, politicians remember what young people are: All throat and no vote”.

Thompson says this because, “Between 1964 and 2012, youth voter turnout in presidential elections has fallen below 50 percent, and Baby Boomers now outvote their children’s generation by a stunning 30 percentage points”.

So while young people have suffered higher unemployment than any other group during the economic downturn in America, and their wages fell more more than any other group after it concluded, and they are savvy, switched on and mad as hell, they still aren’t voting the way they should, and that is why Republicans control over half of state legislatures and governor’s mansions, and make it so hard for any liberal agenda to gain real traction.

The Millennials only turn out in force for the big elections, the Blockbusters, as Thompson dubs them.

“But the math of democracy is unyielding,” Thompson writes. “If you want a revolution, you have to vote for it. Not just every four years. Not just for cool candidates. Not just for political outsiders unsullied by the soot of experience. If young people want a liberal revolution, they have to vote again and again and again, in local elections, midterm elections, and presidential contests. To change the country, America’s young revolutionaries have to do something truly revolutionary: They have to convince their friends to vote like old people”.